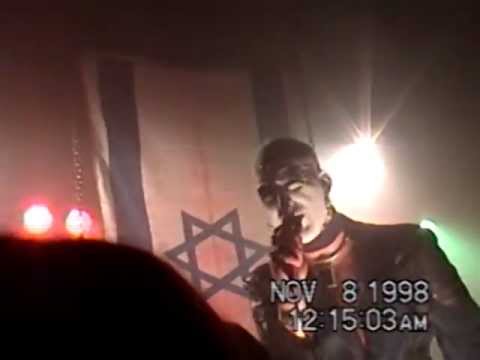 This was an absolutely AMAZING show!  My first time (of three) to see Saviour Machine.  It was the most beautiful, but yet the most terrifying show due to content and theatrics.  It was truly the epitome of “art”.  To this very day, this is the GREATEST show I have ever witnessed in person.  It was mind-blowing in every way imaginable.  When they got to the point in the show where Eric torches the U.N. flag, he gives the candle to someone in the crowd.  THAT PERSON WAS ME!!!  lol!  I *STILL* have that candle!  Haha!!

This show was actually A LOT longer than the video shows.  They played for 2 or 3 hours that night.  They were supposed to play this venue back in ’92 or ’93 during the same tour of the infamous Nu Union show.  That tour got canceled as a result of the incident that played out in Minnesota that night.  The Bartlesville show (not sure if it was the next show on the tour) was within the week of that Nu Union show.  Eric Clayton said on stage in Bartlesville that they were playing an extra long set to kind of “make up” for missing Bartlesville the last go around, some 5 or 6 years before.  Saviour Machine only played three shows in 1998.  One in Elgin, IL on Halloween night.  Bartlesville, the following Saturday on 11/07/98, and Christmas Rock Night in Germany.  They wouldn’t play another show ANYWHERE until Cornerstone Festival 2001, which was the second of three SM shows I was fortunate enough to have been able to witness in person.