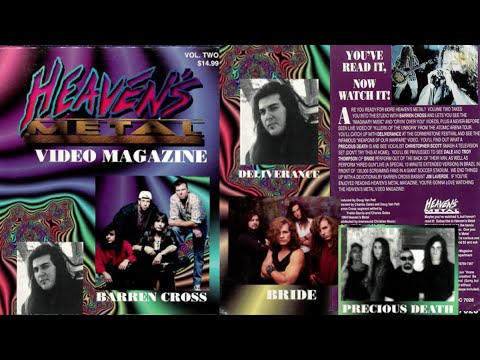 Are you ready for more Heaven’s Metal? Volume two takes you into the studio with Barren Cross and lets you see the “Imaginary Music” and “Cryin’ Over You” videos, plus a never-before seen live video of “Killers of the Unborn” from the Atomic Arena Tour. You’ll catch up with Deliverance at the Cornerstone Festival and see the infamous “Weapons of our Warfare” video. You’ll find out what a Precious Death is and see vocalist Chrstopher Scott smash a television set (don’t try this at home). You’ll be privileged to see Dale and Troy Thompson of Bride perform out of the back of their van, as well as perform “Hired Gun” live (a special 12-minute extended version) in Brazil in front of 135,000 screaming fans in a giant soccer stadium. We end things up with a devotional by Barren Cross bassist Jim LaVerde. If you’ve enjoyed reading Heaven’s Metal Magazine, you’re gonna love watching the Heaven’s Metal Video Magazine!