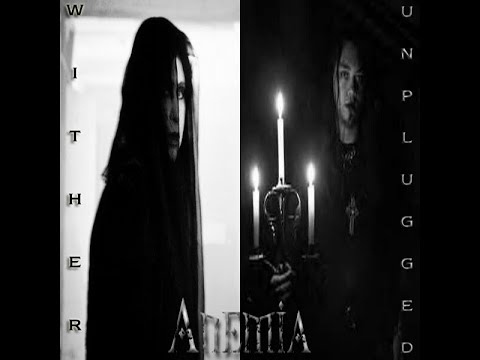 This collection of songs is an acoustic set of Anemia’s “Wither” album. DISCLAIMER: These recordings were NEVER intended for the public. They were merely simple acoustic tracks – unmixed, unmastered – that Skot Shaw sent to me (he’s based out of Chicago, I’m in OKC) to rehearse for an acoustic live set we were scheduled to play at Audiofeed Festival 2014. Distance being our biggest obstacle, we weren’t able to actually physically practice together or play any “warm up” shows in preparation for the Audiofeed set. If you were there, you already know it wasn’t particularly our best moment. LOL! It was downright terrible if I’m being honest.

The musical arrangements of the songs as we ended up playing them were COMPLETELY different from the acoustic tracks I had prepared for, and I didn’t find out until the day of our performance. I don’t remember what the reasoning was behind that, but suffice it to say it was probably my worst performance EVER, personally. But we finished it. It was ugly though. lol! At any rate, I decided a long time ago to put vocals to these tracks. I never intended to put them out there publicly so much as it was just something for me personally to have for my own collection.

Funny thing is, I actually am much more satisfied with my vocal work on this than I am the official album. The official album is GREAT musically, but I never was quite satisfied with my own work on it. Anyway, like I said, this is not polished. Musically, it’s not mixed or mastered to any significantly acceptable production standard. There’s at least one point where Skot jumps the gun on a vocal line (but he’s quiet in the mix so it’s not as audible as it could have been), and I added a word to a line in “Desperate”, which made the statement grammatically incorrect. Haha! So, yeah… this isn’t perfect by any means, but honestly, I don’t think it’s that bad either. I’m actually rather fond of this. Like I said, this was meant to be nothing more than “practice tracks”. If you were one of the poor, unfortunate souls who witnessed that trainwreck in 2014 at Audiofeed, THIS is what that set was basically supposed to sound like, for the most part. Tracklist and times are as follows…